))) The Book: this month I have been enjoying ‘The Blazing World’ by Siri Hustved. Although not a sound book by any means, I have been finding it relevant as a female arts practitioner, in its exploration of the creative process. It tells the fictional tale of New York based artist Harriet ‘Harry’ Burden, who decides to go against the establishment by hiring male ‘fronts’ to claim her work as their own, with unexpected consequences. The book is presented as a posthumous collection of diary excerpts, interviews and transcripts gathered by a fictional research scholar. It’s cleverly staged and a riveting read, sensitively dealing with what it means to be a female artist in an essentially patriarchal art world. I thoroughly recommend it. 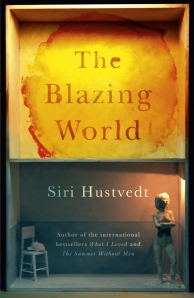 ))) The Sound Experience: this month I had an unusual physical experience in the form of my first ever Tibetan gong bath. I was invited to take part courtesy of the Dublin’s Centre for Creative Practices and the lovely Marta Lyszkiewiczo (pictured below) a sound healer originally from Poland. I went into it with an open mind and was surprised at just how powerful the experience was, particularly in relation to truly ‘feeling’ the sound waves filling the space. I will be sharing my thoughts on this in a forthcoming blog post.

))) The Event: it’s rare to come across a production that stays with you long after the show is over.  These last few days I have been mulling over an unconventional, daring Hamlet by the Berlin’s Schaubühne which opened Dublin’s Theatre Festival at the Bord Gais Energy Theatre. Directed by Thomas Ostermeier, it featured a haunting score by Nils Ostendorf.  You can check out my review here. 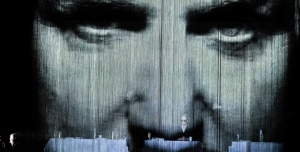 ))) The Audio Files: lately I have been enjoying delving in the audio world of Craig Burgess, aka Perpetual Prism and finding a lot I like.  A lecturer and sound artist based in Manchester, Craig crafts minutely edited, dreamy soundscapes from his own field recorded material. I have been recognising in Craig’s works some similarities with my own approach and sensibility to soundscape design, and in the treatment and subtle manipulation of our own field recordings. Very much unlike myself, Craig has also been utilising football (Man City!) as source material, with great results: check out the piece below. Can’t say I am a football fan, but was hooked on this one!

You can listen to more of Craig’s works (and more from Man City) on his Soundcloud page.

))) The Work: this past month work has well and truly resumed its pre-pregnancy pace. Recording and logging has been in full swing for a new radio programme I am co-producing with support from the Broadcasting Authority of Ireland (Sound & Vision II).  Early pre-prod on a brand new commission is also underway, which I am excited about, and I have managed to complete a small number of new soundscapes that will be released over the next few weeks. While production/ recording/ editing work are nothing new, for someone who is usually behind the mic fronting and interviewing for the radio show is an interesting challenge and a learning curve, but our guests so far have been nothing short of inspiring, with more to come over the next weeks and months. The programme is due for broadcast in the first half of 2015 and it’s hard not to stay tight lipped on this one, but look forward to sharing the finished product in due course.